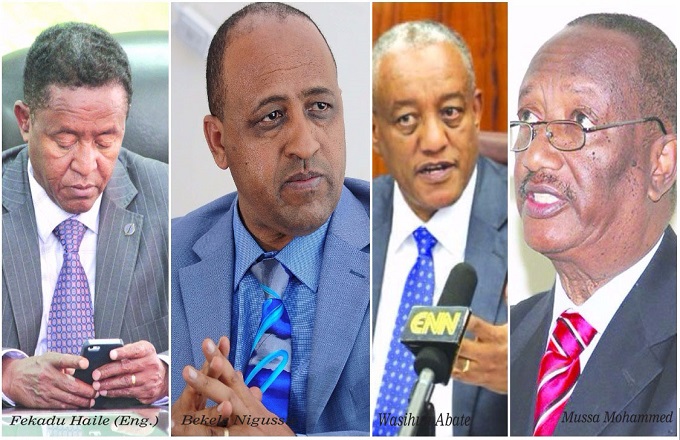 Addis Ababa, July 29, 2017 (GCDC) - In what could be considered to be a major crackdown on corruption in the past few years, the Federal and Addis Ababa Police have apprehend some 39 government officials, brokers and businesspersons in the middle of the week and charged them with corruption, which involves more than 1.15 billion birr.

The detainees appeared before the Federal High Court Lideta Bench on Thursday and the investigators of the Federal Police and the Attorney General has been granted 14-day extension to conclude their investigation and level formal charges on the suspects.

This corruption operation is said to be instigated mostly by the reports of the Federal and the Addis Ababa Auditor Generals who have presented their reports to the Parliament and the City Council, respectively, months before alleging billions of taxpayers’ money being spent without proper documentation and following the procurement rules and regulations.

The list of detainees incorporated personalities like Fikade Haile (Eng.), former director general of the Addis Ababa City Roads Authority (AACRA) and two others from the same institutions including an Israeli Contractor Minash Levi, owner of Tidhar Construction. All in all, the suspects from AACRA are charged for 198 million birr.

On the other hand, ACCRA’s national counterpart Ethiopian Roads Authority also saw Bekele Negussie former deputy director general at the Authority and currently appointed to lead the newly established Infrastructure Coordination Authority as the most recognized name for an alleged embezzlement of 646.9 million birr along with his assailants. Meanwhile, from Ministry of Finance and Economic Cooperation, Wasihun Abate, head of the legal department of the Ministry for many years is another recognizable face from the list of the detainees. Also from MoFEC, Musa Mohammed is also among those who have held high position at the Ministry before he was arrested for corruption.

Apart from that, heads of finance and procurement departments at Methara and Tendaho Sugar Factories and officials from the Omo Kuraz V Sugar Project, which is yet to operational, are also included on the list.

Below is the list of all officials, individuals and brokers under custody: