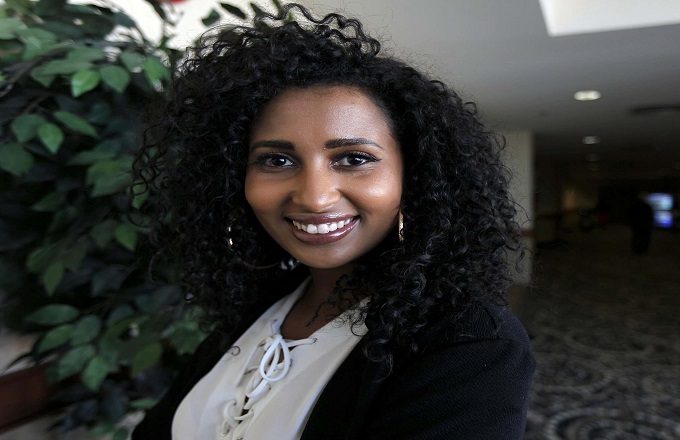 Winnipeg, Canada, April 25, 2018 (GCDC) -  Abseret Hailu is proud of her Ethiopian heritage. Since 2011, the 24-year-old University of Manitoba medical student has volunteered with the Ethio-Canadian Cultural Academy.

The organization started as an effort to showcase Ethiopian culture to the wider Winnipeg community while teaching young Ethiopian immigrants the languages and traditional dances from their home country.

The institution has since grown to include a wide variety of programs for youth of all ages and backgrounds.

"I love being able to be a positive role model for the youth," said Hailu, who emigrated from Ethiopia with her family in 2005. "I feel my mom was my positive role model, and I want to be that for them. That’s my drive, that’s what keeps me going."

Her efforts were recognized this past Thursday when she received a Premier’s Volunteer Service Award at the 35th Annual Volunteer Awards.

The awards were presented by Volunteer Manitoba and Manitoba Liquor & Lotteries in a ceremony at the Victoria Inn Hotel and Convention Centre. More than 30 exceptional volunteers from across the province were recognized.

Receiving an award was an honor, said Gerrie Prymak, who has spent the past nine years volunteering with North End Stay and Play, a group where children and their families can play together.

North End Stay and Play has moved around over the years, but currently is raising funds to build a permanent facility on Selkirk Avenue. The center will be called the Phoenix Sinclair Little Stars Playhouse and it will be open six days a week.

Prymak and her colleagues have raised about 90 percent of the $1.5 million they need to build the center.

"I really feel strongly that we need to find support for our families and their young children so that there aren’t so many kids in care," she said.

Ian Bailey, another award recipient, was recognized for the many charitable and non-profit organizations he has supported over the past 40 years while working as a physics teacher at Oakenwald School.

Bailey, 63, has organized fundraisers for the Heart and Stroke Foundation, the Manitoba Marathon, the Children’s Wish Foundation and more.

"I just enjoy seeing the excitement these various events bring to the students," he said. "It makes them feel important that they’re doing something for others."

Bailey’s spirit of giving earned him the Lieutenant-Governor’s Make a Difference Community Award.

"It’s not every day you get a phone call from the lieutenant-governor saying she has something exciting to tell you, so I was quite taken aback by the original phone message I had received," he said. "It’s quite an honor."

Like Bailey, Hailu was honored to receive recognition for her work. She sees the award as an indication she’s on the right path.

"It’s motivation," Hailu said. "It keeps your efforts going and it makes me feel like (I’m) doing something right."

For a complete list of this year’s winners, visit volunteermanitoba.ca/awards.

If you know a special volunteer, please contact This email address is being protected from spambots. You need JavaScript enabled to view it.. (Winnipeg Free Press)