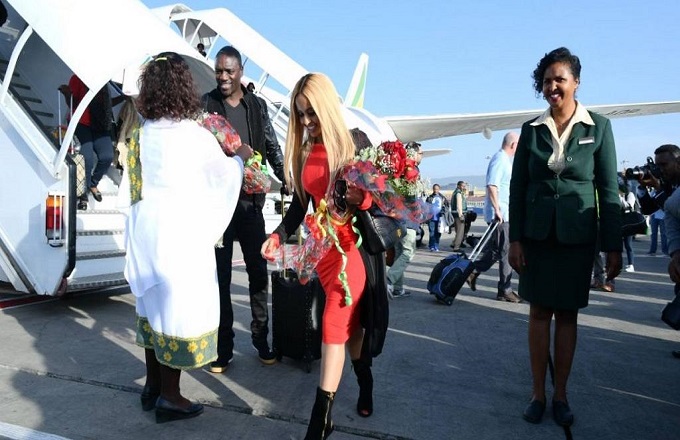 Addis Ababa, March 02, 2018 (GMN) - Senegalese-born - United States pop star, Akon, is in Ethiopia as part of events to celebrate the infamous Battle of Adwa which happened 122 years ago.

The global music icon, however, arrived at the Bole International Airport in the capital Addis Ababa aboard an Ethiopian Airlines plane. The airline shared photos of Akon’s arrival along with his wife Rozina Nigussie.

Aside from issues to do with the 122nd anniversary of the Battle of Adwa, Akon has addressed the African Union on the issue of youth migration.

He delivered a presentation on the theme: “African Youth and Challenges in Migration” as part of the Monthly Series of African Union Talks.

About the Battle of Adwa

Thousands gathered in the country’s Northern town to mark 122 years since repelling the Italians. In the age of relentless European expansion into Africa, Ethiopia, led by Emperor Menelik II, defeated one of Europe’s major powers.

Italy had taken control of the impoverished territories of Eritrea and Somaliland and wanted to further advance its imperial ambitions by taking over adjoining Ethiopia.

Adwa is a market town and separate district in northern Ethiopia specifically in the Tigray region. It is best known as the community closest to the decisive Battle of Adwa fought in 1896 with Italian troops.

Happy Anniversary of the victory of Adwa! #BattleofAdwa #BlackHistory