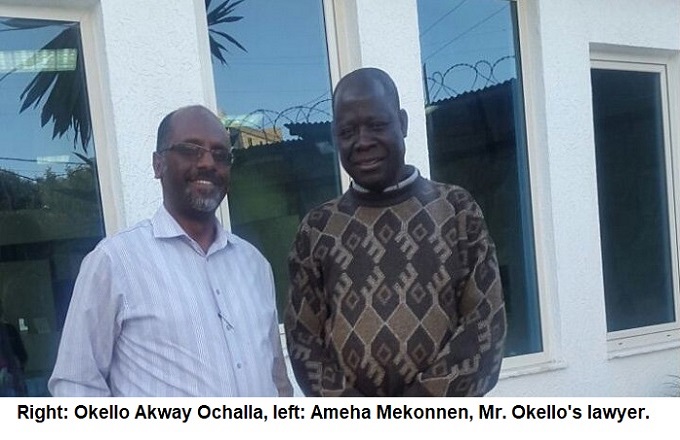 Oakland, CA, February 14, 2018 (GCDC) - On February 14, 2018, Mr. Okello Akway Ochalla, an indigenous Anuak leader, Norwegian citizen, and the former Governor of the Gambella region of Ethiopia, was released after being held as a prisoner on trumped up charges in an Ethiopian jail for nearly four years.

In March 2014, while visiting relatives in South Sudan, Mr. Okello was abducted in complete disregard of extradition treaties and international law, forcibly taken to Ethiopia, and charged under the country's draconian Anti-Terrorism Proclamation. His crimes included speaking to the international media, such as the BBC and Voice of America, about the 2003 massacre of the Anuak people, and the ongoing plight of the people of Gambella.

In December 2003, over a period of several days, Ethiopian soldiers massacred over 400 Anuaks in Gambella. Mr. Okello, who was the governor of the region at the time and an Anuak himself, fled Ethiopia with his young children, making the perilous journey to South Sudan by foot, and eventually sought asylum in Norway. In the ensuing years, human rights abuses in the region – including the planned eviction of up to 225,000 people from their land to make way for large-scale agriculture investments – continued. Mr. Okello became an outspoken advocate for justice and the rights of his people to their life and land. It was this work that led to his unlawful detention. 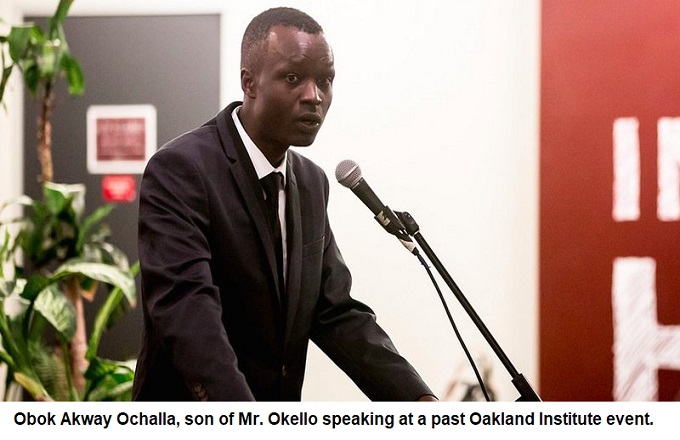 Mr. Okello's case is emblematic of the vicious disregard for rule of law in Ethiopia and the oppressive nature of the Ethiopian regime.

"From day one, Mr. Okello's case has exposed the brutality of the Ethiopian regime," said Anuradha Mittal, Executive Director of the Oakland Institute. "They kidnapped a man, forced him to sign a confession, made him endure solitary confinement, and put him through a seemingly endless and fraudulent legal process. In the end, he was sentenced to nine years in prison, all for speaking up for the rights of his people."

"Over the past four years, the Oakland Institute has fought tirelessly, hand-in-hand with Mr. Okello's family and lawyers, including defense lawyer Ameha Mekonnen and Lewis Gordon the Environmental Defender Law Center, to secure his release," continued Mittal. "Today, we cannot undo the immense injustice that Mr. Okello and his family have borne, but we can celebrate his freedom. We remain committed to supporting Mr. Okello's transition back home, and the plight of the numerous other political prisoners currently held in Ethiopia."

Mr. Okello's release comes in the wake of the Ethiopian government's recent pledge to free some of the countless political prisoners currently held in the country and close its notorious detention facility, the Maekelawi police station. For years, thousands have been prosecuted and tortured for speaking out about land grabbing and the human rights and governance crises in the country. This includes opposition politicians, indigenous and religious leaders, students, journalists, and more.

"While we celebrate that Mr. Okello is free, the release of some political prisoners is far from enough," said Mittal. "Thousands continue to languish behind bars; repressive legislation, like the Anti-Terrorism Proclamation, remains in effect; and the government's development policy continues to marginalize and dispossess indigenous groups from their lands and livelihoods. As long as the economic development of the country takes place at the expense of basic human rights, we will continue our work." (The Oakland Institute)

Media Contacts: Anuradha Mittal, This email address is being protected from spambots. You need JavaScript enabled to view it.