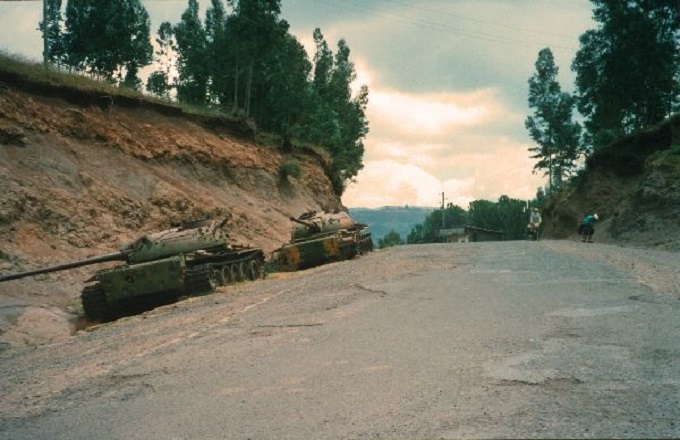 December 18, 2018 (GCDC) - "State of Ethiopian Affair is now clear, war is inevitable!”. Debretison Gemremichael, chairman of TPLF and Tigray regional state president, has been traveling to different parts of Tigray and has conveyed the message he wanted. Despite the pretext for his travel was visiting development projects, his cardinal mission was “to prepare people for the inevitable war,”

Noting that TPLF’s chairman has been condemning Prime Minister Abiy Ahmed’s reform moves, “The Federal system in under deconstruction and the constitution is violated.”

Debretsion also reportedly told people in different parts of Tigray that TPLF has been “foiling attacks on itself and the people of Tigray.” And he went on to tell people in Tigray: “We are capable not just to defend ourselves but defend others.”

Speaking about the next move, president of Tigray described it as “to fight back the threat from left and right, and rescue the federal system for which we paid much", which may mean war.

It has been 40 years since the TPLF had effective control of Tigray without intervention from the center.

“Not sure if it is lack of power or ‘they will not do it’ sort of conviction on the part of Dr. Abiy’s team, there seem to be no preparation to rescue the people of Tigray from TPLF, and that is what TPLF wants. 90 percent of farmers in Tigray live subsistence life and do not know politics. If they know anything, it is TPLF’s propaganda indoctrination, and they are not aware of Team Abiy’s change for peace, democracy, justice, and national dignity,”

“…TPLF has always the habit of projecting itself as the underdog to its perceived enemies. This helps the rival not to prepare adequately because of the wrong perception that the enemy is too weak and can be dealt with easily.”

The peasantry in Tigray is that it is impoverished and could be easily tricked and mobilized by TPLF. If Debretison’s team hands out a uniform and a rifle to farmers, throwing a little party slaughtering an ox and beat the drum “Wufer Tebeges” (war song), it could be seen as a miracle from heaven for the unemployed peasantry, and maybe even seen as an “opportunity.”

Some opposition politicians from the Tigray region are also concerned about TPLF’s “mobilization for war” kind of activity. Aregawi Berhe was one of the founders of TPLF over forty years ago but abandoned it in the ’80s after he fell out with leaders in the party on political grounds. Now he is the leader of Tigrean opposition. Speaking to VOA Tigrigna service, as reported by Ethiopia Observer, he labeled TPLF’s assertion that “the anti-corruption campaign is targeting Tigreans selectively” as a distortion of truth and reality.

He is not alone. When Andom Gebreselassie, one of the respected leaders in the ethnic Tigray opposition group, Arena-Tigray, spoke out against the TPLF leaders’ mantra that “Tigray is selectively targeted” this week during a town hall meeting in Mekelle, where Bereket Simon made a presentation, OLD TPLF ideologues like Sebhat Nega and his cohorts silenced him making noises and claps.

It seems like the war is an escape route from culpability for TPLF leaders and they seem to be capable of mobilizing Tigray for it.